Without any preconceptions, I evolve a design from the inside out, open to all possibilities. 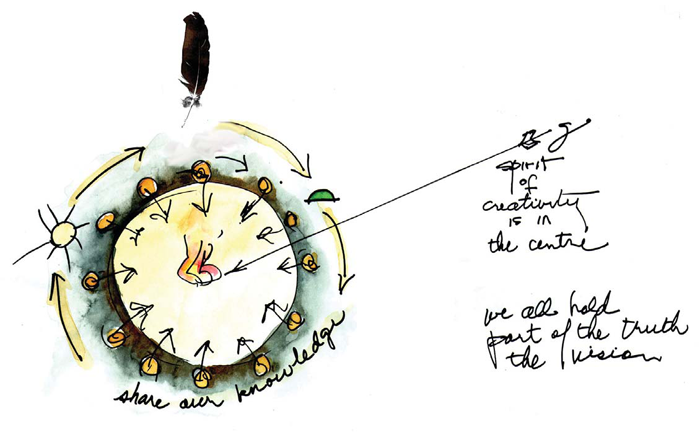 Douglas Cardinal expresses his buildings in a signature style of harmonious curvilinear forms. Yet, the elegance of his designs is not limited to aesthetics- he has a deep understanding of architecture as a tool to better the world. A proponent of Organic Architecture, Douglas Cardinal understands architecture as a holistic enterprise where all members of the architectural process conjunctively create a legacy for the future. Indeed, Douglas believes that each building takes a life of its own as a living, organic being shaped in close partnership with the client and all stake holders.

As an architect, Douglas Cardinal has created a practice where he brings clients' visions into reality. Douglas believes we humans have a responsibility to our gift of creativity, and that with our wills connected, we can create anything. To make this happen, Douglas Cardinal’s unique architectural process starts with a Vision Session. He encourages the client to analyze all aspects of the usage of a space by studying the empirical, practical, emotional and spiritual needs of a building. Thus his buildings are designed with a soul, which is found in the intentions and the deepest hopes and desires of all stake holders. In this unique and rigorous exercise, the client can clearly identify all resources needed - be it technological, professional or financial - that will be required in completing the project. Ultimately, it is not the architect that creates the buildings, but the client; it is their vision, their financing, and their social commitment that organically grows a built environment that reflects their projected identity. The architect gives shape to and coordinates the intricacies of the clients' visions for a building.

Precisely because he believes there is no end to our capability to create that which is envisioned, Douglas Cardinal has defied rectilinear conventional principles of architecture. As early as the 1960’s he began using the amazing capability of computers in order to calculate the complex organic forms, most notably in the curved roof of his first masterpiece, St. Mary's church in Red Deer, Alberta. He incorporated the technology further to increase the dimensioning precision and affordability of his organic forms, and by the late 1970’s Douglas

Cardinal Architect became the first architectural practice to be entirely computerized, utilizing an architectural program designed exclusively for the firm. St.Albert's Place, in St. Albert, Alberta - now designated a historic building - was the first building in the world to be built with totally computerized architectural technology to dimension all construction drawings. Douglas Cardinal’s unique approach to computers extends beyond the conceptual design phase, as he constructs in three dimensions with detail accuracy to at least ten decimal places.

His exceptional use of computer software is unparalleled to this day, as he integrates computer technology in a manner which creatively encourages the evolution of techniques and technologies of the construction and trade industries. All this creates better architecture.