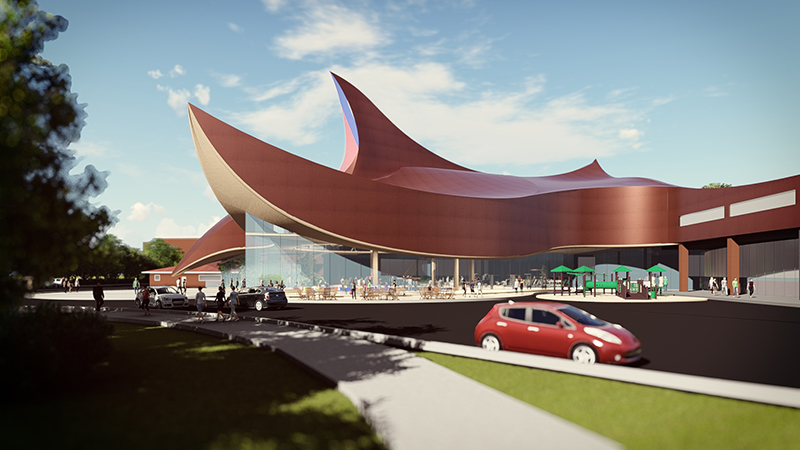 Cambrian College in Sudbury, Ontario serves many communities around Northern Ontario and Quebec. One quarter of the students are from the First Nations communities, and the service and dedication to these students are expanding the number of programs they require. The whole population that they are serving has been severely damaged by Canada’s residential school system, and they need spaces to honor and practice their traditions, for their elders and ceremonies, in order to help them heal from this tragedy that has been perpetrated on them.

The archives of these residential schools document terrible abuse and torture of the indigenous children, which has traumatized every family and brought long term consequences. Several of the schools in the area were found to have electric chairs in the basement. The college will house the archives of these residential schools so that they will be available for scholars in the region, nationally and internationally. It is imperative that this part of Canadian history be recorded and shared so that it never happens again.

Along with the archives there will be reading rooms, seminar rooms, counseling rooms, and ceremonial spaces to empower the indigenous culture, and the worldview of loving and caring for each other. The space will be designed in a way that honors the local environment and the natural cycles to help people to reconnect with the land, since they are of the land.

The building is placed in front of the main entrance so that everyone who enters the Cambrian College will be greeted by ceremonial spaces that reflect the indigenous culture where people resided for millennia. As an entry way it reaches out towards all who come towards the space.

The main entry will be from the East. In front of the entry will be a circular plaza, in the center of which will be an exterior ceremonial fire. On the periphery of the plaza will be the main road, bus parking, and access to the public parking areas. The entry will reach out to the summer and winter solstice lines of the rising sun. The main entrance doors will be on the line of the equinox.

This orientation will provide the main circular gathering space for celebration and ceremony, the opportunity for the traditional sunrise ceremonies, emphasizing the special ceremonies for the solstice and equinox celebrations.

The central space will be the main gathering space for college events as well as the special events of the first nations communities in the region in which the first nations is served. It will be a place of celebrating the survival of these indigenous cultures, where people can gather to exchange ideas, support, and use the space as a sacred spot for powwows, regional, national, and international events.

There will be appropriate kitchens to welcome people with food with adjoining cafeteria and dining facilities, as well as providing for large events such as banquets.

The second level will have a circular corridor around the ceremonial space, connecting to the glass elevator and stairs, serving the Gathering, Learning, and Administration spaces. The details programs of each area are still being defined.

The third level is open to the West, the equinox, and the setting sun. That will be conference rooms, seminar rooms and ceremonial spaces honoring the setting sun, as well as an extension of the existing library space for archival material.

The fourth level is facing south, observing the cycles of the moon. Ceremonies to the sun and the moon, and the heavens will be the primary use of this space.

The sculptural form of the building is the symbol of the eagle, which represents the east, the rising sun, which represents a new day, a new dawn, a new opportunity to rise above the past and soar above the profane world into the spiritual realm, where we can all create a better world for our people and for all the people that share our land with us.